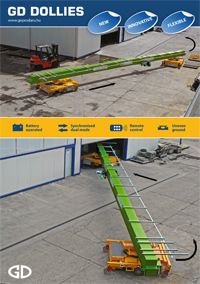 The bogie test bench allows simulating the load of the vehicle by examining the wheel force and other important factors of the bogie after assembly in the workshop or before dismantling. The bogie gets on the test bench on rails where two hydraulic cylinders apply pressure to the shoulders of the bogie. After that the device measures how the load is distributed between the wheels. Then the adjustment can immediately be done and the result can be checked by repeating the measurement. The bogie leaves the test bench ready to be built in.

Depending on the construction of the bogie test bench the axis-centre distance, the parallelism of the axle, the suspension, the side blow, the diameter of the wheels can be adjusted and the state of the air suspension can be checked, etc.

The whole process of the measuring is controlled by computer. After the test the values will be saved on the computer and can be printed as a record any time.

The accumulator driven self-propelled bogie pusher with radio remote control is a useful addition to the bogie repair workshops. By applying those it is possible to push the lowered bogie from under the lifted vehicle without human effort. There is no need for persons to be under the vehicle during pushing.

The pusher grasps the bogie by its central bolt or by a complementary bolt and pushes it to the desired place (e.g. to the bogie test bench).